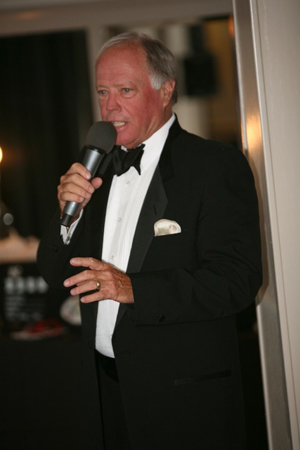 Steve has been performing Frank Sinatra tribute shows for years. He performs over 75 of the favorite Sinatra songs in a style highly reminiscent of Ol’ Blue Eyes himself. Whether he is singing an emotion-filled ballad such as “Witchcraft,” “Didn’t We,” or “All My Tomorrows” or such foo-tapping high-energy songs such as “Lady Is a Tramp,” “Fly Me to the Moon,” or “Under my Skin,” Steve brings the same great style to every song. Many people have commented that when they close their eyes they can actually imagine Sinatra on the stage. Performing shows from one to four hours, Steve will either carefully choose the songs to bring a full representation of the “Best of Sinatra” to your event or you can choose your favorites from among Steve’s library of songs. You can even choose to add songs from other artists.

Steve also performs another type of Sinatra Tribute Show. In this one he tells the story of Frank’s life from birth to death. This is done in short segments between songs, each from 15 seconds to as long as two minutes. These segments include humorous and touching stories, career milestones and setbacks, as well as interesting stories about his various marriages. The songs have been carefully chosen to either represent the decade discussed or to add to the story line. Either way, they are a collection of his most memorable hits, including “Come Fly with Me,” “All or Nothing at All,” “I’ll Never Smile Again,” “Lady Is a Tramp,” “What Are You Doing the Rest of Your Life,” and “New York” plus many more. Versions of the show have been edited to meet client’s time or budgetary limitations, from one hour to the full two-hour version.